The Art of the Plasterer 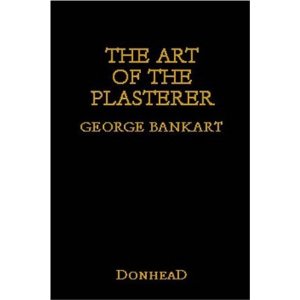 George Bankart was an architect who, in accordance with the principles of the Arts and Crafts movement, became a skilled plasterer in order to contribute to the breaking down of barriers between the design and the construction of buildings. He was competent, enthusiastic and knowledgeable in his chosen trade, and influential in its promotion in the early years of the twentieth century.

In 1927 he was asked to revise William Millar’s Plastering Plain and Decorative for its fourth edition, and was also the joint author of several other works on the subject. His photographic collection is now in the Victoria and Albert Museum, and it is likely that he was responsible for many of the casts of fine plasterwork which can also be found there, although frustratingly little is currently available for public viewing.

The Art of the Plasterer was first published in 1908 and reissued in a slightly revised form around 1910, which version is the original of the present high-quality facsimile reprint. The 2002 edition is augmented with an excellent short introduction by Tim Ratcliffe and Jeff Orton, neither of whom will be strangers to many members of the Forum.

Its original and stated purpose was as a complementary volume to the earlier editions of Millar’s authoritative work on the “mechanical and trade side” of plastering, intending instead to provide a “comprehensive treatise on the decorative bearing of the plasterer’s art” within Britain, for which Bankart perceived a clear need.

The book presents its subject in a clear chronological line of development, commencing with its background in the “stucco-duro” (meaning lime-based fine plasterwork) of the Classical world, through its rediscovery during the Italian Renaissance by masters such as Raphael, Giulio Romano and Jacopo Sansovino, all of whom are significantly cited as masters of the trade, not just as the architects they are more conventionally recognised as now.

The book reaches its main subject, however, with the importation of the art and its practitioners into Britain by Henry VIII, principally for the construction of Nonesuch Palace, which in turn provided the foundation for an indigenous “English school of plasterwork” and allied local traditions in Scotland and Ireland, each of which receive a chapter in their own right. The story is continued into the later Renaissance in England and the eventual arrival of properly Classical architecture with detailed consideration of the work of Inigo Jones and Sir Christopher Wren.

This historical development is primarily presented by the comprehensive illustration and description of a broad catalogue of significant works, the majority of which have clearly been studied and recorded by Bankart himself in considerable detail, and it is this thorough survey of work, and the overview of precedent which it gives, which is possibly the most valuable aspect of the book overall.

The reader is left with a very clear, primarily visual understanding of the history of the art and how it developed under the influence of changing circumstances and fashions. The accompanying historical analysis and interpretation, however, is not particularly thorough (nor is it intended to be), and the reader who wishes to explore the subject in more detail will need to move on to more detailed historical works which build on and amplify a significant part of Bankart’s introductory overview.

Useful interludes in the progression of the chronology are provided by individual chapters on “sgraffito” and “parge-work” (external pargeting), both of which, the latter in particular, contain valuable technical information relevant to an understanding of the artistic forms and patterns which result.

With Chapter XI the book takes a much more polemical turn, and Bankart’s strongly-held Arts and Crafts principles become overt, although not without justification. This chapter is bluntly entitled “The Eighteenth-Century Degeneration”, and charts how the design of plasterwork from the beginning of the Neoclassical period came to be a primarily academic exercise in the following of rediscovered Classical precedent rather than a living craft in the hands of its practitioners.

Designs were now created by architects and merely executed by plasterers, a trait that became more pronounced as the century wore on, culminating here in a strikingly brief near-dismissal of the Adam brothers’ work. Of the nineteenth century Bankart says nothing except to ask rhetorically why work of the period is “so uninteresting, bad and uncouth” at the outset of the chapter on “Modern Plasterwork”, which, with the following “Notes Addressed to Students and Apprentices” forms a passionate plea for the revival of craft values and skills, and for the institutions by which they may be taught and encouraged.

In a book which purports to be a comprehensive history of its subject, such an imposition of a particular set of values seems quite out of place by modern standards, but it has to be stated, on reflection, that Bankart’s point is founded on far more than pure prejudice. Examination of the copious illustrations and descriptions of plasterwork found in the book in many ways substantiate his hypothesis, and they are by no means cynically chosen simply for this effect.

We also find ourselves now, almost one hundred years later, bemoaning even more the shortage of craft skills within the building industry and conservation field, and the lack of suitable circumstances and institutions for rectifying the imbalance. The apparent prejudice and passion may just not be quite so quaint after all.