The History of Guaged Brickwork 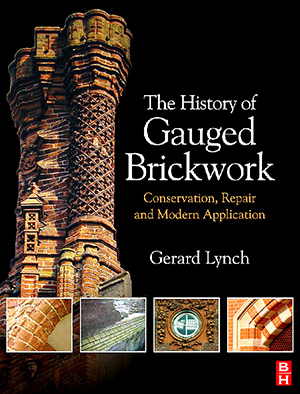 Well, what an honour for me, Jeff Orton, a simple plasterer – or as they say in the trade a ‘spread’ – to be asked to review The History of Gauged Brickwork; Conservation, Repair and Modern Application written by my good friend: Gerard the ‘bricky’. Nevertheless this is not a book about bricklaying; it is a very well-timed publication for anyone with an interest in old and historic buildings.

During Gerard’s and my lifetimes and careers, the building industry has gone through more dramatic changes than it has ever been through before. Some people would like to think that the traditional building crafts are just a thing of the past. For others those crafts and the buildings they produce are most important. I would like to think that Gerard and I fall into the latter category. That is why this book, with its emphasis on decorative brickwork, does not just fill a gap, it lays the foundation for what could become a whole new era for this important branch of the trade. This book should stimulate the interest of architects, surveyors, and structural engineers and bricklayers to realise what was once, and could be again, produced with a little bit of the right sort of imagination, ingenuity and skill.

Gerard is just a typical ‘bricky’ who likes to think about his work and his materials, as all the true craftsmen do. However it also emphasises the lengths Gerard is prepared to go to in order to understand his craft as the craftsmen that would have been able to help and advise are all now unfortunately dead.

If someone was to pick up the book and just flick through, glancing at the chapter headings, they would probably say that it is just another book on the history of brickwork. Far from it as this is also a very good technical handbook.

There are one or two well-known books on plastering that profess to be technical publications, but which simply do not deliver the necessary information. These works have been written by intellectuals, who have wanted to be involved with the crafts.

One thing I would like to add and feel very strongly about (bearing in mind that this is purely a little obsession of mine) is that all the buildings mentioned in the publication would have been built in feet and inches, so it is ever so nice to have that form of measurement printed first and then the metric equivalent in brackets as it is in most of the book.